The United States is a diverse country in nearly every aspect—including its license plates. This article explores some of the key obstacles we overcame in developing high-accuracy license plate recognition (ALPR, or LPR) for each of the 50 States of America. 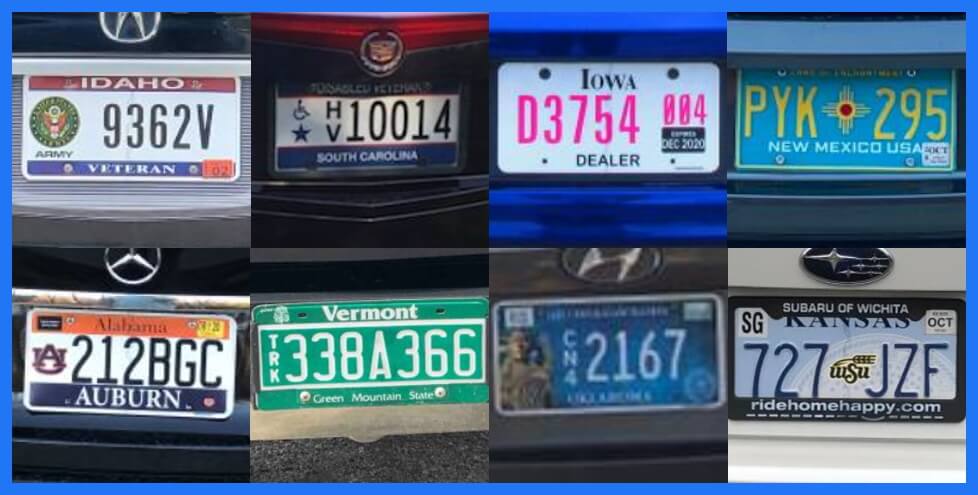 Some license plates from across USA.  Source: Plate Recognizer clients and varoius websites.

The United States of America, popularly known as the United States (U.S. or US) is a country located between Canada and Mexico.  It is made up of 50 states, five major self-governing territories, a federal district, and various possessions.

No other word describes the US better than the word: diversity.  Each state is diverse in regard to its size, politics, weather conditions, points of view, education-level, religion and many more.

Some US states lean very far left and are strong Democrats, such as Vermont, New York, Massachusetts, and Maryland while others are die-hard Republicans, such as Alabama, South Dakota, Idaho, Montana, North Dakota, and Wyoming.

There are states that are cold year-round like Alaska, North Dakota, and Maine.  Some are always hot most of the year, such as Florida, Hawaii, and Louisiana.

Source: Current Results website on cold and hot US states.

Diversity of License Plates in Each US State

When it comes to license plates, USA is also very diverse. Each US state has its unique license plate with distinct design features, fonts styles, colors, templates, and more.

State emblems like flag, slogans and “state name” are usually embedded into some US state license plate designs, such as those in Florida and Maryland.

Most of the license plates regularly issued for passenger vehicles usually have 5-7 characters while vanity plates or specialty have up to 8 characters.

With this amount of variation, the license plates of America are not easy for humans to sort and organize, let alone for an ALPR engine.

Description of license plates from some US States.  Source: Statistica and Wikipedia.

In the section below, we identify the top 5 issues we faced while doing our USA research and training our license plate recognition software to be able to accurately decode the license plates from each of the 50 US states.

The main challenges are summarized as: 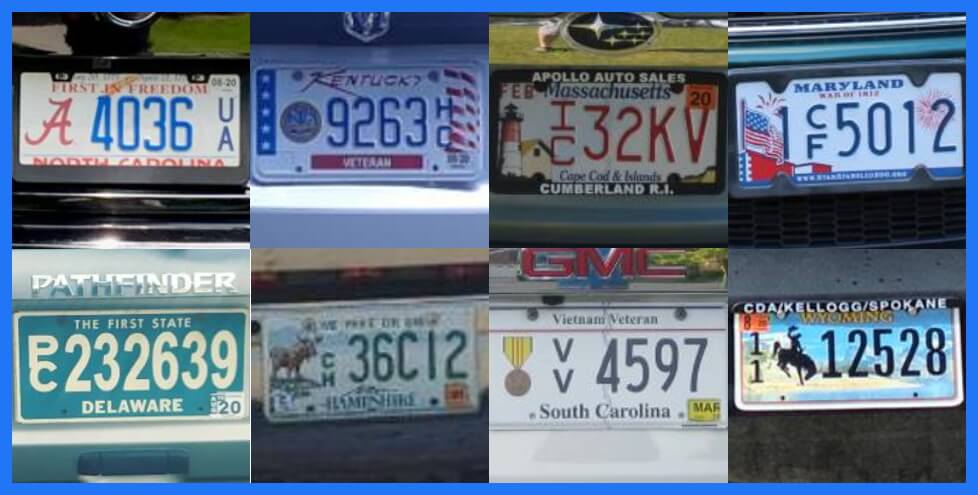 Many states in America have a fascination with icons.  They really want to portray the spirit or rally cry of the state through its license plates.  Notable examples are Florida, with an orange in the center and Wyoming, with a cowboy on the left of the license plate.

Some icons are big enough and are not decoded.  But, others are rather small, making them appear like a number or letter from far away.

We had to specially tune our ALPR engine to omit reading these icons. 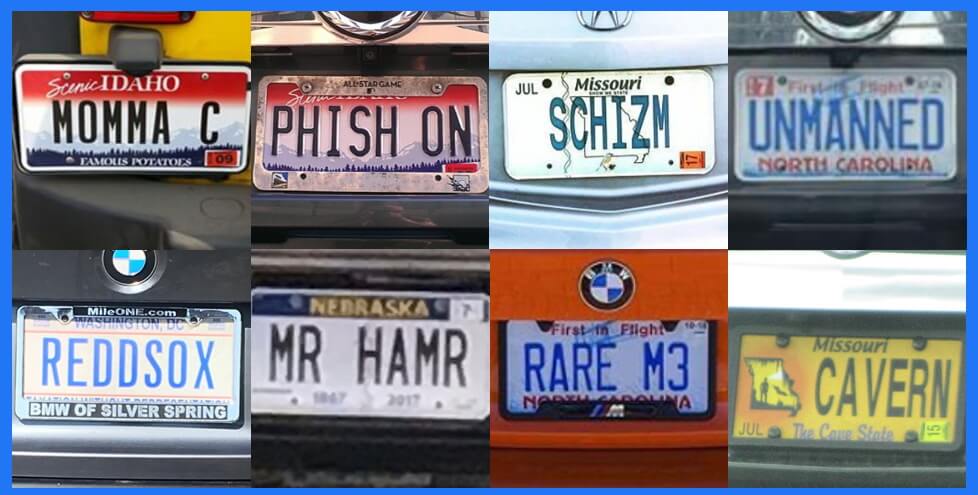 A vanity plate, also known as personalized plate, is a special type of license plate that’s customized to suit the owner’s preference.  The owner of the vehicle pays an annual fee to have their own choice of numbers or letters, which are then used to compose a phrase, slogan, or abbreviation on his plate.

This table below shows vanity plates for different US States.  Virginia has the highest vanity plate penetration rate while Texas has the lowest.

Vanity plates present additional complications for an ALPR engine, since there is absolutely no well-defined pattern associated with a vanity plate.

We applied statistics on the penetration of plates that are vanity plates to help refine our ALPR software.

America is the land of open expression!  In some cases, citizens express their love for all things—including both sides of the political spectrum (on the same vehicle).

These bumper stickers present an unusual challenge for our license plate detection algorithms.  Many of these sticks look like vanity plates!  And in many cases, these stickers are placed right next to the actual license plate.

This requires our ALPR system to detect these irrelevant details.  To overcome this, we layered another level of filtering in order to get accurate plate results.

An example of a car with a bunch of bumper stickers.  Source: Online website.

Some vehicle owners use license plate frames that exceed the normal permitted standard and cover important details on the license plate.  So critical parts of the license plate, such as the state’s name on top or slogan on the bottom is hidden from view.

This is equivalent to hiding a few key letters of a word and expecting the software to guess the whole word.

This makes it awfully difficult to identify the vehicle’s state, a key ingredient in maximizing LPR accuracy.

Key Lesson Learned from Fine-Tuning our ALPR for USA

Initially, we relied mainly on our 2 neural networks to analyse and decode each state’s license plate.  This worked to some extent and yielded accurate rates around 90%.  But we were not satisfied with that level of accuracy.  That’s only an A- grade.

After some brainstorming, we decided to incorporate a systematic US-based state by state identification model.  This identification helped fine-tune the ALPR system to assess the unique characteristics of each plate.

Our Plate Recognizer engine is required to make multiple educated guesses (we call them machine learning estimates) to understand the US state of origin of the vehicle.

Deciphering the vehicle’s state gives us many clues to help our ALPR software decode (and in some cases omit) the characters and signs that it sees.  Some examples:

After a concerted, dedicated team effort, we were able to improve our LPR accurate rates to 99%!

One Big Bonus: US State Identification

It’s interesting how one thing helps the other.  By improving our ALPR software to identify the license plates of the 50 different US States, we are now also able to decode the plate characters themselves with much better accuracy!

Don’t take our word for it.  Take our Free Trial ALPR for a test drive!

If there are specific areas (or states) you think we need to do-better, let us know!  We’re a very humble team, after all.

Previous
ALPR for 96Boards
Next
Using ALPR in a Smart Home