We want to thank Bart Butenaers for writing this article.  He’s an enthusiastic, active Node-RED contributor and also the developer of the node-red-contrib-plate-recognizer node and a bunch of other nodes as well!

Node-RED is a flow-based programming tool for visual programming, by wiring together hardware devices, APIs and online services.  This IOT (Internet Of Things) tool was developed originally by IBM Emerging Technology, and is currently a project of the JS Foundation.

A Node-RED flow contains a series of nodes, which are connected by wires.  A browser-based flow editor is provided, to simplify the process of designing such a flow.  The nodes in the Node-RED palette can be dragged on the flow, and deployed to the Node-RED server runtime in a single click.

Nodes can communicate with each other by sending messages across the wires.  Those messages can contain any number of fields, which can contain any kind of data (numbers, texts, images, …).

Node-RED is shipped with a series of nodes out of the box, which are called the ‘core’ nodes.  Node-RED can be extended easily by adding custom nodes into its palette.  At the time of writing, the Node-RED palette contains 2494 nodes developed by open-source developers from all over the world.  Nodes are available for all kind of tasks, protocols, etc.

A Node for ANPR

Since messages also can contain images, there is a need for Node-RED nodes which can process those images.  Therefore the Node-RED palette contains a number of image processing nodes, each one focussed on a particular image processing task.

One of those nodes is the node-red-contrib-plate-recognizer node, which can recognize license plates in an image.  The input message needs to contain an image, and the output message will contain the recognition results (in JSON format).

This ANPR node can very easily be configured via its configuration screen: 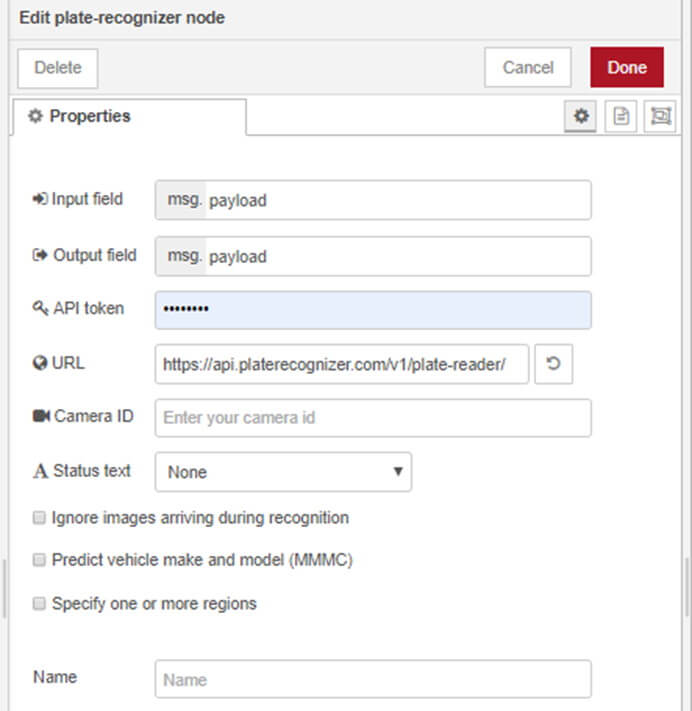 The URL input field in this configuration screen allows this node to access the Plate Recognizer ANPR service running at different locations:

Once the node has been configured, it can be used in a typical license plate recognition flow:

ANPR Node-RED with Other Nodes

The output of the Plate Recognizer node can be wired to the inputs of other nodes available in the palette.  Due to the large number of nodes in the palette, a very powerful system can be built very easily.

Some Use Cases for ANPR Nodes

There are many, many use-cases to incorporate this ANPR Node.  The recognition results can trigger all kinds of IOT-related functionalities, such as:

Needless to say that the number of IOT applications is endless, both for home and professional use.

Why Plate Recognizer ANPR for Node-RED?

Plate Recognizer is the ideal candidate for anyone looking to do ANPR on Node-RED for the following reasons:

Since Plate Recognizer fulfills all these requirements, their service has now been integrated into the Node-RED platform.

Give it a try and let us know what you think!

Previous
ANPR for Brazil
Next
Blur License Plates for FOIA

Made with love from Silicon Valley & Budapest.